Before buying a board, you need to know which type of board you're looking for. This post details the main types as well as some examples. Also be sure to check out the post on drive systems!

Street is the most common type of board. These boards are perfect for street riding and carving but perform poorly in wet conditions or non-flat surfaces due to the lack of any tread on the wheels. This also tends to be the most affordable category because of the high demand and intense competition between board manufacturers.

Street boards have smaller wheels (compared to AT), usually 85mm-100mm with no tread. The outer wheel part is made of a material called polyurethane (PU) which is given a durometer rating to quantify the hardness of the wheel, ranging from about 70 on the soft side up to 80+ for harder wheels. If you want a smoother ride, you can choose softer wheels with the caveat that they will degrade faster.

Street boards most commonly use belt drive or hub motors for their drive system. There are some boards coming out now that use gear drive as well as a few with direct drive but for the most part, it's hub and belt.

AT boards are perfect for riding offroad, through grass, and dirt paths. Their main defining feature is the huge tires which are either pneumatic (air-filled) or foam. They range from about 6-8in in diameter and have treads to prevent hydroplaning and eat bumps.

You will sometimes see straps/restraints to help keep your feet planted on the board. Straps can be really helpful for those hoping to traverse rough terrain. In addition, their decks are often slightly longer than traditional longboard decks for additional stability.

As far as drivetrain goes, most AT boards use belt drive but there are a few that use hub motors instead. You'll also see some boards using double kingpin trucks which provide a closer turning circle as well as more ground clearance.

AT boards are the most expensive boards of the group due to the often custom-made wheels, high power requirements, and large batteries. There are many boutique board makers in this category most notable being LaCroix and Trampa.

The third category is hybrid which lies between a street and an AT board. They're perfect for light dirt trails and short grass. The wheels are usually > 100mm with some sort of tread but not pneumatic or foam. Most street boards (besides hub) can be easily converted to hybrid with a quick wheel swap.

The most popular wheel that basically created this category is the 120mm Cloudwheel. This wheel is super popular for users that want a street board with light offroading capabilities.

Some users have reported traction issues while riding on pavement so be careful when first trying these wheels. This is likely due to the curvature of the wheel reducing contact with the ground. 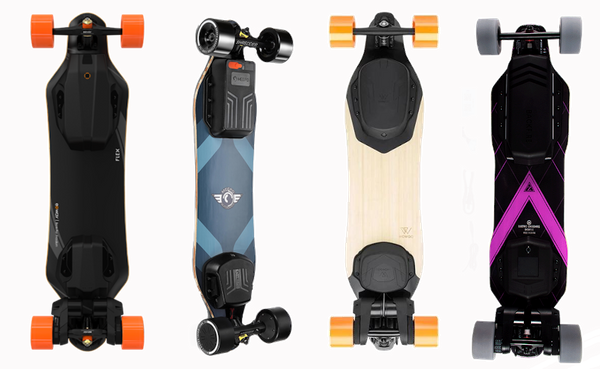 This price segment is the most competitive with new boards being released here frequently. It's really the sweet spot for most people where you get a great board without breaking